The Senior Bowl Hall of Fame

“We are proud to announce an incredible class of inductees,” said Jim Nagy, executive director of the Reese’s Senior Bowl.  “Each of these men was a premier player in the National Football League at his respective position and all have the credentials to one day end up in Canton (home of Pro Football Hall of Fame).  We are honored to bring this group back to Mobile to celebrate their great NFL careers.”

An exciting new addition to this year’s Hall of Fame festivities was the inaugural Senior Bowl Charities Golf Classic (presented by IBERIABANK, a division of First Horizon Bank), which was held at Lakewood Golf Club on the property of The Grand Hotel. This exclusive event paired 18 foursomes with celebrities from across the football world, including the five current Senior Bowl Hall of Fame inductees.  The list golfers included all-time greats such as former Cleveland Browns tight end Ozzie Newsome and former Houston Oilers outside linebacker Robert Brazile—both members of the Pro Football Hall of Fame—as well as former Mississippi State head coach Sylvester Croom, a member of the Senior Bowl Hall of Fame.

The Senior Bowl was forced to cancel the 2020 Hall of Fame induction ceremony scheduled for last April due to the Covid-19 pandemic. 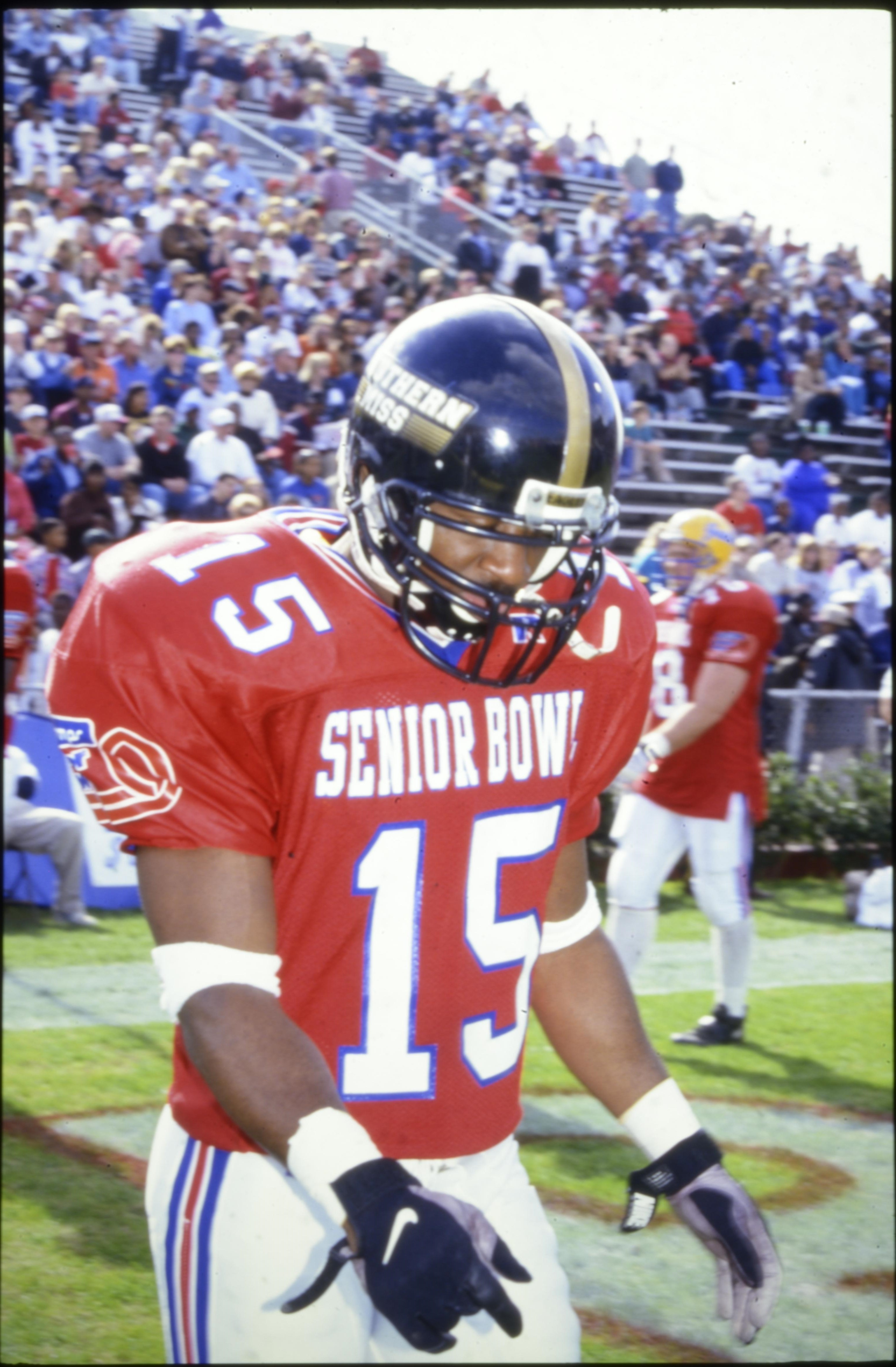 “It’s a tremendous honor to have been selected for the Senior Bowl Hall of Fame.  I just think about all the great players that have played in this prestigious game and to be recognized amongst the best is truly humbling.  The Senior Bowl put a spotlight on me and the University of Southern Mississippi, which propelled me to have a great professional career.  I am truly thankful.” 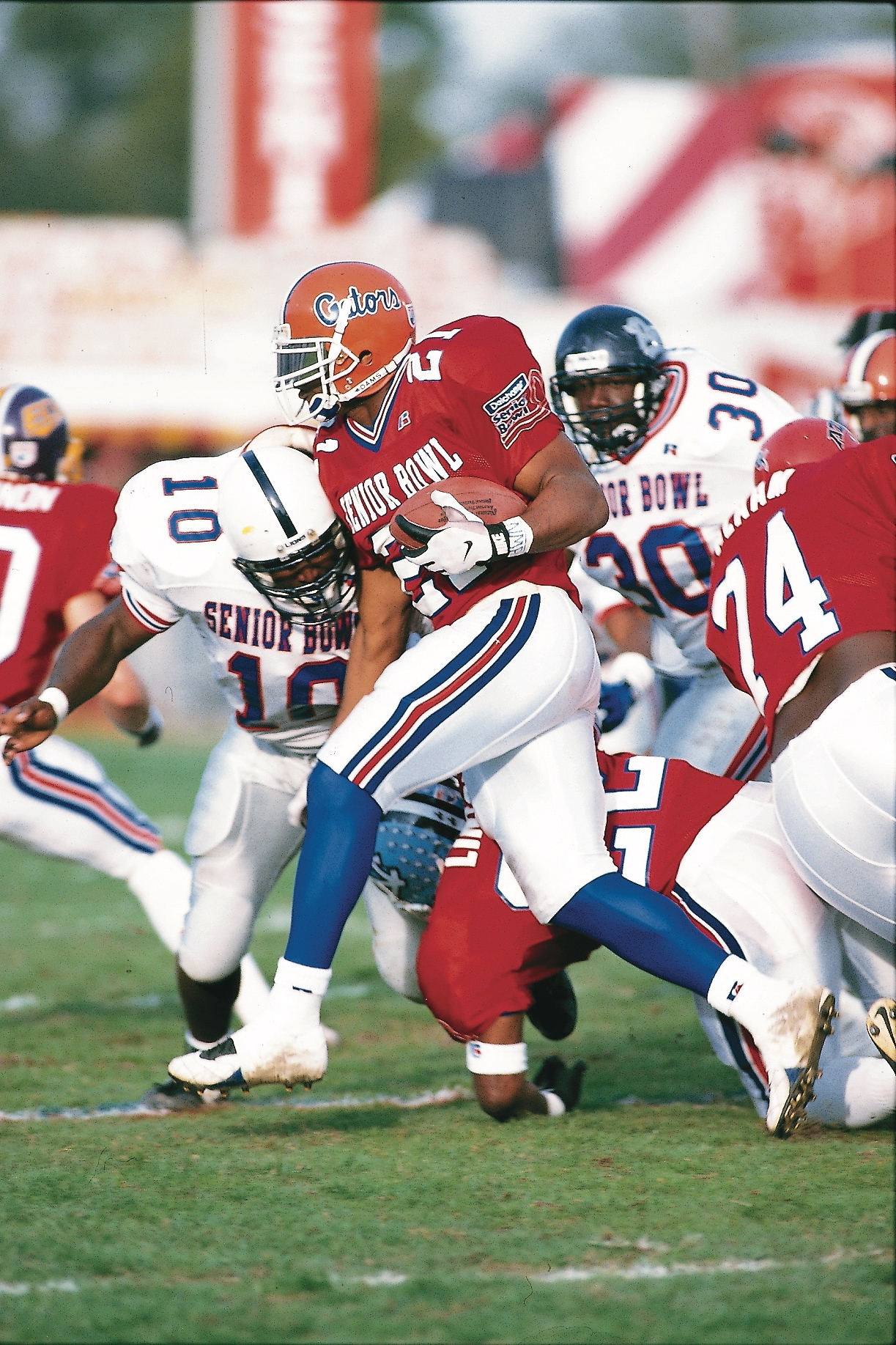 “My experience at the Senior Bowl was a great end to my college experience and also my first glimpse into the NFL.  It was awesome being coached by NFL staffs and it was an honor to compete with the top seniors in college football.  I had many lasting friendships that were made over the course of the week.  The experience was priceless.  I am forever grateful for the opportunity to play in the Senior Bowl and honored to be selected to the game’s Hall of Fame”. 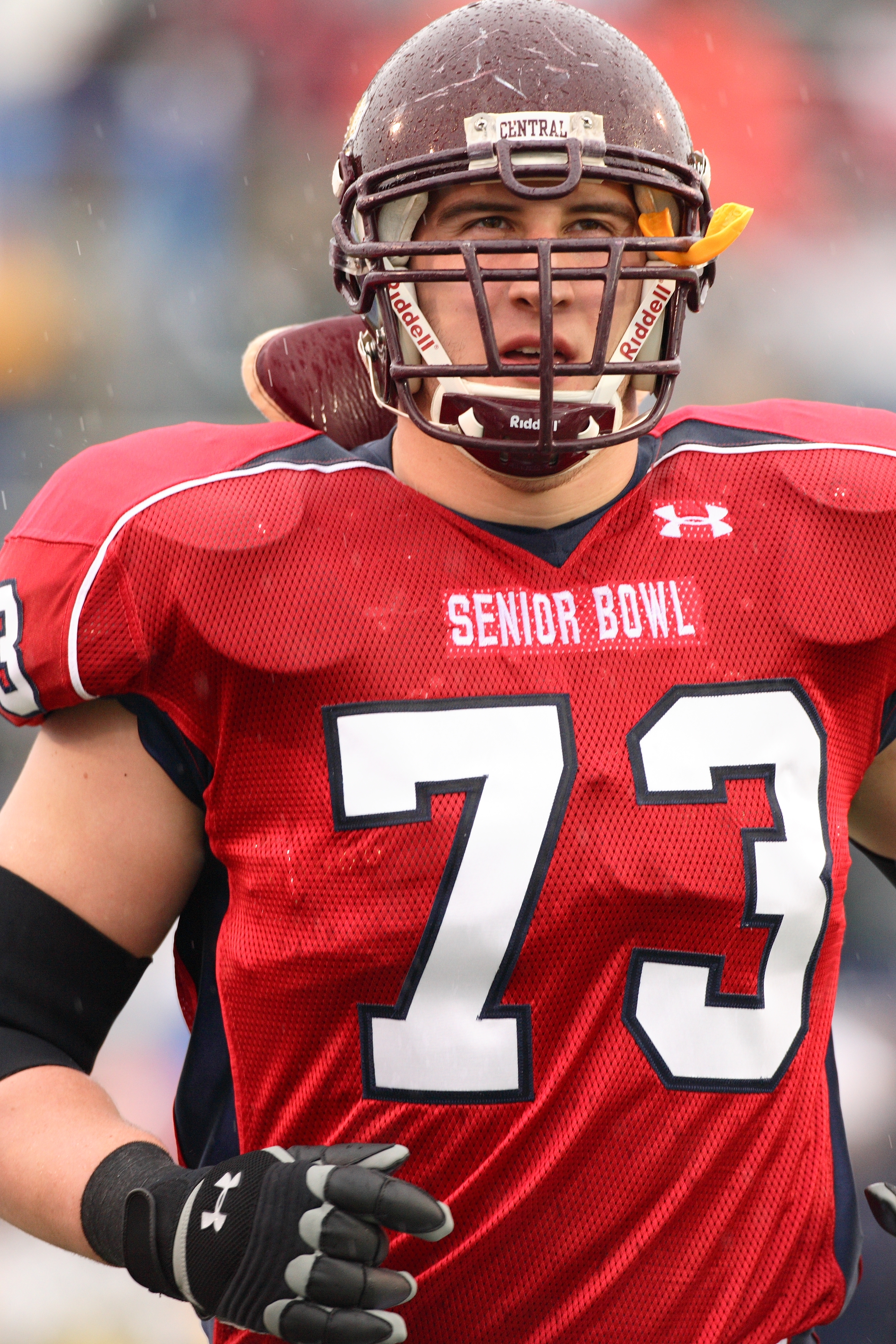 “Being invited to play in the Senior Bowl was a huge deal for me coming out of Central Michigan.  It offered me an opportunity to compete against the very best in the country and show what I could do as a player.  It is a great honor to be selected to the Senior Bowl Hall of Fame among so many other athletes that I look up to and have competed with or against over the years”. 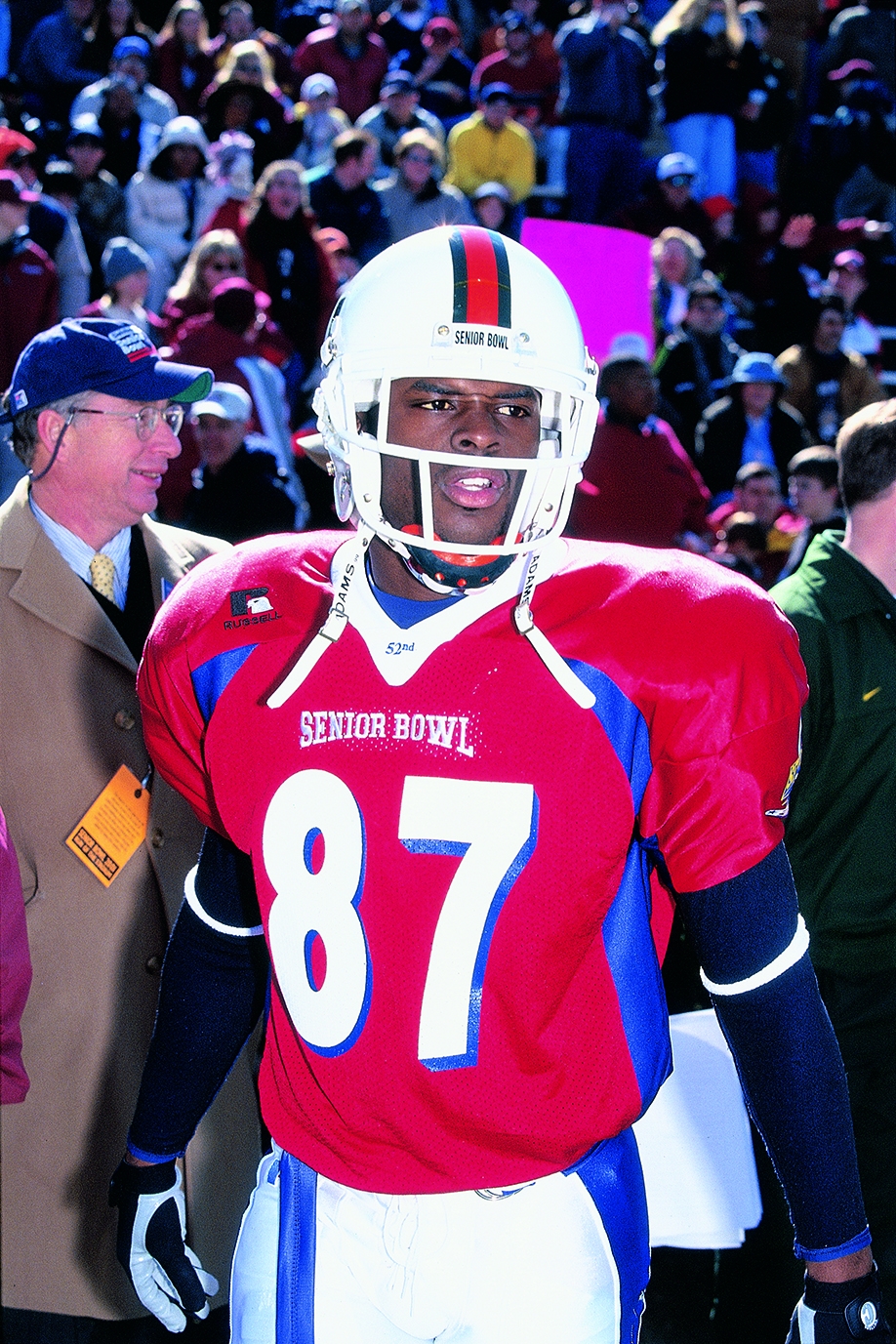 “I believe my experience at the Senior Bowl turned me from a mid-second or third-rounder into a first-rounder in the 2001 draft.  I am truly honored to be inducted into the Senior Bowl Hall of Fame.  Playing in this game ended up being the best decision of my life.” 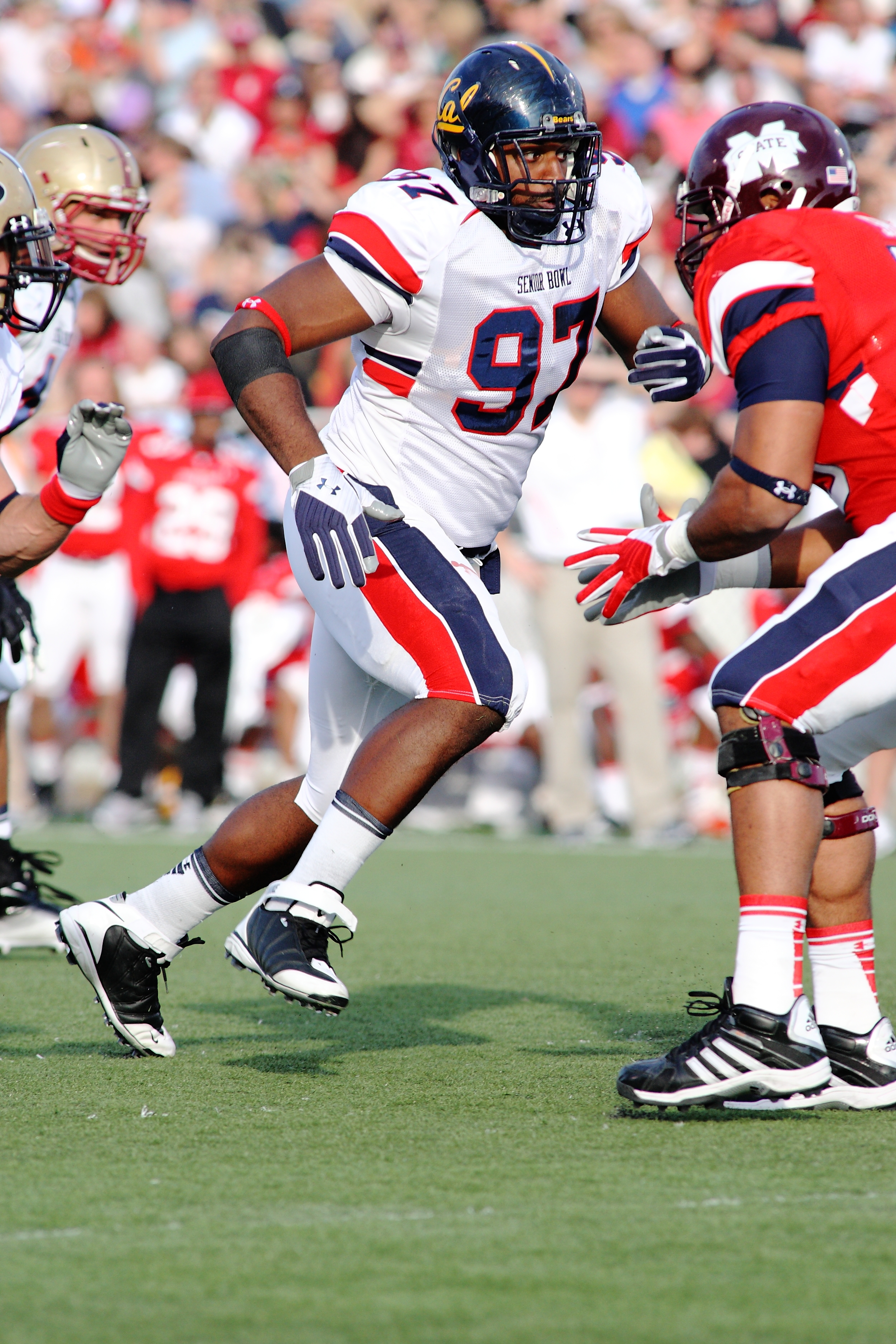 Selected No. 44 overall in the 1998 draft by the Miami Dolphins…played in 163 games in 11 seasons (7 with Dolphins and 4 with Chiefs)…three-time Pro Bowler, 2002 first team All-Pro, and 2003 second team All-Pro…finished NFL career with 547 tackles, 37 interceptions and 105 passes defended…inducted into the Southern Miss Hall of Fame in 2011…finished his college career with 406 tackles, 46 tackles for losses, seven quarterback sacks and three interceptions…twice named first team all-Conference USA and was 1997 Conference USA Defensive Player of the Year… currently serves as head coach at American Heritage High School in Plantation, Florida…named 2020 High School Football America National Coach of the Year…has led American Heritage to three state championships in five years

Selected No. 9 overall in the 1998 draft by the Jacksonville Jaguars…played in 153 games in 13 seasons (11 with Jaguars and 2 with Patriots)…Jaguars all-time rushing leader with 11,695 rushing yards (4.6 avg) and 66 rushing TD…also had 290 career receptions for 2,384 yards and 8 receiving TD…had 7 career 1,000-yard rushing seasons…at one point held 42 Jaguars franchise records, including career rushing attempts and career rushing yards…burst onto scene with 1,223 yards at 14 rushing TD as a rookie in 1998…led NFL with 107.6 yards per game average in 2000…named to Pro Bowl and second-team All-Pro in 2007…appeared in playoffs six times, making it to AFC Championship game in 1999…spent final two seasons (2009-10) with New England Patriots…was second player in franchise history to be named to Pride of the Jaguars… finished his college career ranked fourth in University of Florida history with 3,075 yards and 31 touchdowns…member of Gators’ 1996 National Championship team as junior…was named first-team All-SEC and third-team All-American as a senior after rushing for 1,292 yards and scoring 13 TD…was inducted into University of Florida Athletic Hall of Fame in 2010

Selected No. 28 overall in the 2007 draft by the San Francisco 49ers…spent his entire 13-year career with the Niners…started all 181 career games that he appeared in at left tackle…six-time Pro Bowler and three-time second-team All-Pro…named to the NFL’s All-Decade Team of the 2010’s…voted to Pro Football Writers Association All-Rookie team in 2007…appeared in 12 playoff games and two Super Bowls (XLVII versus Ravens and LIV versus Chiefs)…announced his retirement after the 2019 season…originally started his college career at Central Michigan at tight end and was moved to tackle prior to his sophomore year…allowed only one sack over his final two college seasons and was named first-team All-MAC as a senior

Selected No. 30 overall in the 2001 draft by the Indianapolis Colts…spent his entire 14-year career with the Colts…appeared in 211 games and missed only 13 over the course of his career…streak of 189 consecutive games played is third-most by a wide receiver in NFL history…finished his career with 1,070 receptions for 14,345 yards and 82 TD…ranks tenth-place in NFL history in both receptions and receiving yards…played in six Pro Bowls, including five straight from 2006-2010…voted first-team All-Pro in 2007 after leading the NFL with 1,510 receiving yards and was twice named second-team All-Pro (2007 and 2009)…recorded eight 1,000-yard seasons…appeared in 23 career playoff games, which included a pair of 200-yard efforts…played in two Super Bowls (XLI versus Bears and XLIV versus Saints)…scored a 53-yard touchdown in Super Bowl win over the Bears…was four-year starter at University of Miami…named Big East Rookie of Year and Freshman All-American by The Sporting News…set school record with 173 receptions…finished his Miami career ranked first in career receptions, second in receiving yards, and third in receiving TD…also ran track at Miami…member of U of Miami Hall of Fame and Indianapolis Colts Ring of Honor

Selected No. 24 overall in the 2011 draft by the New Orleans Saints…has never missed a game in 10 seasons…currently has an incredible streak of 160 consecutive starts…has registered 94.5 sacks, 11 FF, and 10 FR thus far in his career…he is the first defensive lineman in Saints franchise history to record 7.5 or more sacks in eight different seasons…set career-high two year ago with 15.5 sacks in 2019 campaign…named to NFL’s All-Decade Team of the 2010’s…voted to six Pro Bowls and three All-Pro teams (1st team in 2017, 2nd team in 2018 and 2019)…was named Saints Walter Payton Man of Year nominee for all his off-field charitable work in 2017…played in 51-of-52 over his four years at University of Cal…three-year starter for the Bears…was named first-team All-Pac 10 as a senior