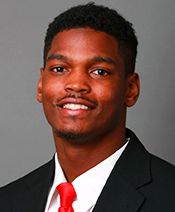 SUMMARY: Established himself as one of the best safeties in the conference in his first season before a season-ending injury … projected starter at strong safety is capable of playing both safety positions … missed spring ball but will be full strength by fall camp.

JUNIOR (2017): Played in nine games with six starts (2 at strong safety, 2 at free safety, 1 at outside linebacker) before suffering a season-ending injury against UCLA … 48 tackles (3.0 TFL) was third on the team at the time of the injury … season-high 10 tackles (2.0 TFL) against Oregon … led Utah with eight tackles and two pass breakups against San Jose State … led Utah with eight tackles against USC and scored a touchdown on an 18-yard run after a fumble recovery.

PRIOR TO UTAH: First-team NJCAA All-American and first-team all-Region VI as a sophomore at Dodge City CC … two-time All-Kansas Jayhawk Community College Conference made the first team as a sophomore … 24 tackles for loss in 2016 tied for third nationally in the NJCAA … tied for 19th in the nation with 100 tackles his sophomore season, when he also had three sacks, four interceptions, five pass breakups, four forced fumbles, three fumble recoveries and a fumble return for a touchdown … 64 tackles, eight sacks, two interceptions, three pass breakups and three forced fumbles as a freshman … first-team Division II all-state as a senior at Wooster HS (Ohio) … also named first-team Division II All-Ohio and Ohio Cardinal Conference Defensive Player of the Year … two-time All-Northeast Inland District selection earned first-team honors as a senior … first-team all-OCC as a junior when he had a team-high 75 tackles, as well as 35 receptions for 724 yards and 11 touchdowns … also competed in track, finishing 10th in the long jump at the Ohio State Track and Field Championships as a senior … placed first in the conference in the long jump and second in the 100 as a senior