On the Road Again: Week 5 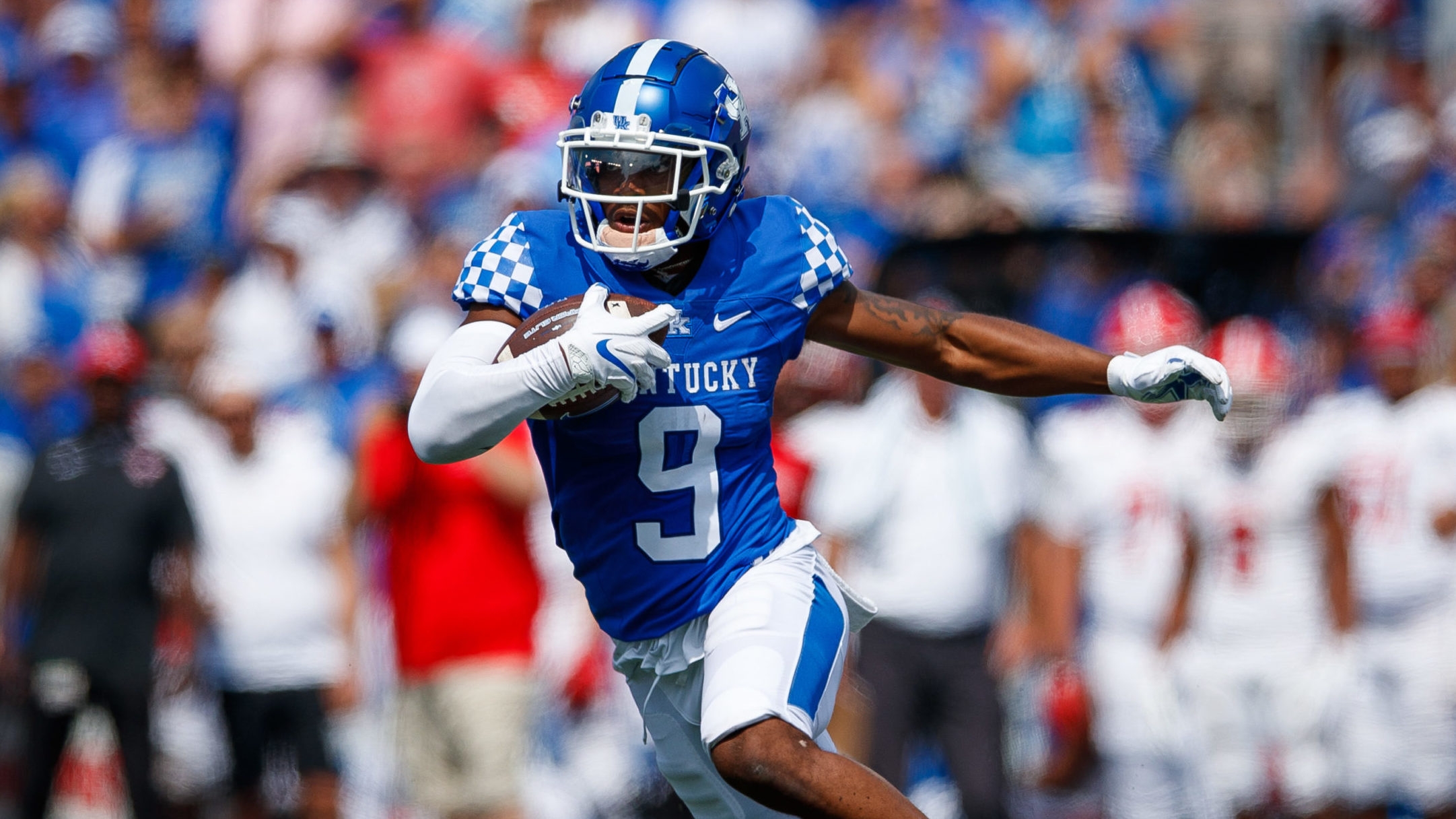 The Reese’s Senior Bowl scouting team will be on 10 college campuses around the country in Week 5. Here are our scouts’ thoughts on one prospect they’ll be looking at in each matchup:

Washington RG Henry Bainivalu: The majority of the media talk around this undefeated UW football team has centered around the play of Indiana transfer QB Michael Penix Jr., who has surpassed expectations through four games. After watching tape this week, though, a big reason for the team’s 4-0 start is the standout play of the Huskies’ offensive line. Sixth-year senior RG Bainivalu was on our Senior Bowl radar last season, and he has made a nice jump based off early-season exposures.

At 6-foot-5 ½ and 330-plus pounds with almost 35-inch arms, Bainivalu will have one of the biggest frames of any interior OL prospect in this year’s draft. He also has good mobility for a man his size. NFL scouts we’ve spoken with say Bainivalu is one of the highest graded O-linemen on the West Coast.

Michigan LT Ryan Hayes: Hayes is from my hometown (Traverse City, Mich.), and his high school athletic director was a childhood friend. Needless to say, we’ve been tracking him far longer than most prospects. The former four-star TE recruit has gradually added bulk over his time in Ann Arbor. You see the offensive skill background whenever he combos, pulls and gets out in space.

Wolverines junior RB Blake Corum has ripped off a bunch of explosive plays by bouncing runs outside. When he does, it’s usually because Hayes is doing an effective job sealing the edge. While he’s still a work in progress from an overall strength perspective, we think Hayes has NFL starter-level upside.

Kentucky WR Tayvion Robinson: Our staff liked Robinson’s junior tape from Virginia Tech, and UK’s staff must have felt the same since they landed him this offseason as the replacement for New York Giants second-round pick Wan’Dale Robinson. In last week’s big game (seven catches for 147 yards and two TDs) versus Northern Illinois, Robinson set up and sold routes on both his 69- and 40-yard scoring plays. He is quick-footed and loose-hipped at the top of routes, and he has the toughness to work in heavy traffic underneath, which is a requirement of NFL slots.

Aside from the explosive playmaking potential, we like Robinson’s willingness as a blocker. Unlike most college receivers we evaluate, Robinson isn’t afraid to dig out safeties or collision second-level defenders. This is a big reason why Kentucky has had success on wide runs this year. Wildcats QB Will Levis has to be thankful the UK staff went out and got this guy.

Oklahoma OT Wanya Morris: All you need to know about Morris’ talent is he’s a former five-star recruit (by ESPN) and was named to SEC’s All-Freshman team as a true freshman at Tennessee. He transferred to Oklahoma after the 2020 season and was relegated to only backup duty last year for the Sooners. After missing the first two games of this season due to eligibility issues, Morris has played at a high level the past two weeks against Nebraska and Kansas State.

The 6-foot-6-inch, 310-pounder immediately jumps off tape with his initial quickness, balance and body control. One of the most critical skills that NFL evaluators look for in offensive linemen is recoverability. Morris is excellent in that area. There simply aren’t many compromised positions he can’t get out of. Aside from the size and athletic talent, we love the way Morris has finished blocks in the past couple of weeks. He was just tossing dudes in the Nebraska game. This is a player we think will be a fast “riser” once national cross-check scouts and director-level guys start looking at his tape.

Air Force TE Kyle Patterson: Patterson is one of the highest-rated recruits in recent Air Force history. They had to beat out Pac-12 schools like Washington and Oregon State for the former three-star. From what we’ve seen on early season tape, Patterson appears to be fully back from the serious knee injury he suffered almost exactly a year ago in Week 4 last season. Air Force’s staff raves about what the 6-foot-6-inch blocking tight end does for their option-based run game. They also like his upside in the passing game.

It’s difficult for NFL evaluators to get a true handle on his ball skills since he has only 18 career catches. Our scout will arrive early on Saturday morning to see Patterson catch as many balls during pre-game as possible. Despite the lack of production, there has been plenty of NFL foot traffic through Colorado Springs to check out Patterson.

East Carolina TE Ryan Jones: Few players in this year’s draft class will have a more interesting backstory than the ECU sixth-year player. The former Oklahoma linebacker transferred to ECU in 2020 and moved to tight end prior to the 2021 season. During the final eight games of last season, Jones caught 36 passes for 404 yards and four touchdowns. He’s off to a good start this year with three touchdowns in four games.

NFL scouts measured Jones at just under 6-foot-2 and 245 pounds last spring, so he projects more as a fullback/F-TE than a traditional in-line Y-TE. However, he has an unusually long reach for someone his size (80-inch wingspan), so there are tools to work with as a blocker. The best thing about Jones is that he has suddenness to separate and speed to threaten down the seam. His defensive background will give him the edge on special teams against most true fullbacks when he’s fighting for a roster spot at the next level.

Kansas OC Mike Novitsky: One of the keys to the Jayhawks’ almost unprecedented 4-0 start has been Novitsky, who transferred from the University of Buffalo. The four-year starter and former All-MAC performer was a big-time portal get, and he’s been a difference-maker up front for coach Leipold’s team.

Novitsky finished with a Pro Football Focus pass protection grade of 96 percent or better last season. It appears he handles all the protection checks for Kansas, which is impressive for a first-year player in any program. Novitsky, who is just under 6- foot-4 and plays in the low-290s, is the type of heady and steady center that typically finds a way to stick at the next level. Saturday’s matchup against Iowa State will be our staff’s first live look at him.

Virginia Tech DB Chamarri Conner: This is about the time of the season – around Weeks 4-6 on the schedule – where scouts can start forming concrete opinions on players. Our staff has already identified Conner as one of the most improved prospects we’ve seen this year. We had a late draftable grade on Conner from his junior tape playing primarily nickel. However, he’s taken his game to a different level this year since making the full-time move to safety.

NFL teams are going to like Conner’s urgency, tackling ability and overall dependability. He’s a guy who trusts what he sees and pulls the trigger when he sees it. He’s improved his ability to tackle in space from a year ago. Saturday’s game against the Tar Heels will be his 42nd-straight start. That high level of durability is impressive for someone who flies around as Conner does. It’s hard to find guys who are the best prospects on their team and who give the type of all-out effort Connor does as a gunner on the punt team. Those special teams reps are going to make him some money on draft day.

Cal FS Daniel Scott: We had pretty strong grades on Scott a year ago. He wasn’t a slam-dunk draft pick, though, so he made the smart decision to return to Cal for another year. Scott is one of the coolest movers in this year’s safety class, and he is one of the few true free safeties who has enough range to make plays from single-high alignment. Coaches think he’s made a noticeable jump from his junior year, and we like what we’ve seen so far.

Movement-wise, he plays with natural knee bend, he’s more fluid than many CB prospects and he has a good trigger. The biggest difference we’ve seen from Scott is he’s playing with more substance. One of his weaknesses as a junior was he would fall off or slide down contact too often. That area has markedly improved these first four games. NFL teams looking for a centerfielder-type in the backend will like what Scott can do.

Virginia WR Keytaon Thompson: He will undoubtedly generate some good healthy discussion in draft rooms next spring. Thompson, who played quarterback at Mississippi State for two years before transferring to Virginia, is one of the most unique tools/skills packages in the 2023 draft class. This is a long-bodied (school lists him at 6-foot-5, 215 pounds) and versatile player who can be a matchup problem in the slot or do damage as a wildcat QB.

Thompson has a toughness and physicality that belies his QB background, and he’s tough to get on the ground. Some NFL teams will have a difficult time projecting him to a certain position, however, there will be creative staffs who see a potentially valuable multi-use player. All we know is Thompson’s tape is fun to watch, and all it takes is one team to have a vision for him.