WHEN: June 6-8, 2022
WHERE: Senior Bowl HQ – 151 Dauphin St. Mobile, AL
WHO: Registration is open exclusively to former NFL players with 2+years in the league.

Registration fees ($500) will cover the two-day course, as well as meals. Registration is limited and will be on a first come first serve basis. If you have any questions, please contact Senior Bowl staff via email: srbowl@seniorbowl.com

To support former NFL players, many of which played in the Reese’s Senior Bowl, we are proud to announce our second annual Senior Bowl Scout School.  Currently, over one-third (34%) of the players on NFL rosters began their NFL journeys in Mobile, Alabama and we feel a responsibility to assist them when they transition away from the playing field. On June 6-8, 2022, NFL alums with at least two years of accredited service are invited to explore scouting as a potential career path.  The course will be led by Senior Bowl Executive Director and 18-year NFL scouting veteran Jim Nagy and Dan Hatman, Director of Scouting Development at The Scouting Academy.  Nagy and Hatman will pull back the curtain on the lifestyle and all aspects of both pathways with NFL scouting departments; pro/advance scouting and college scouting.

“There is a high demand for former NFL players in the scouting profession and, for whatever reason, few guys even consider it as a viable career option.  Most former players we’ve spoken with think that coaching or broadcasting are the only post-playing career avenues in football and that simply isn’t the case.  NFL teams are always looking for scouting candidates with strong playing backgrounds and this seminar will help educate former players on the profession”, explains Nagy.  “We want former NFL players to be able to make educated choices about their future and hearing first-hand from those that went from playing in the NFL to scouting in the NFL is important”, adds Hatman. This involvement with the Reese’s Senior Bowl will expose group leaders to over 900 credentialed NFL team personnel and provide invaluable networking opportunities with scouts, coaches, and upper management. 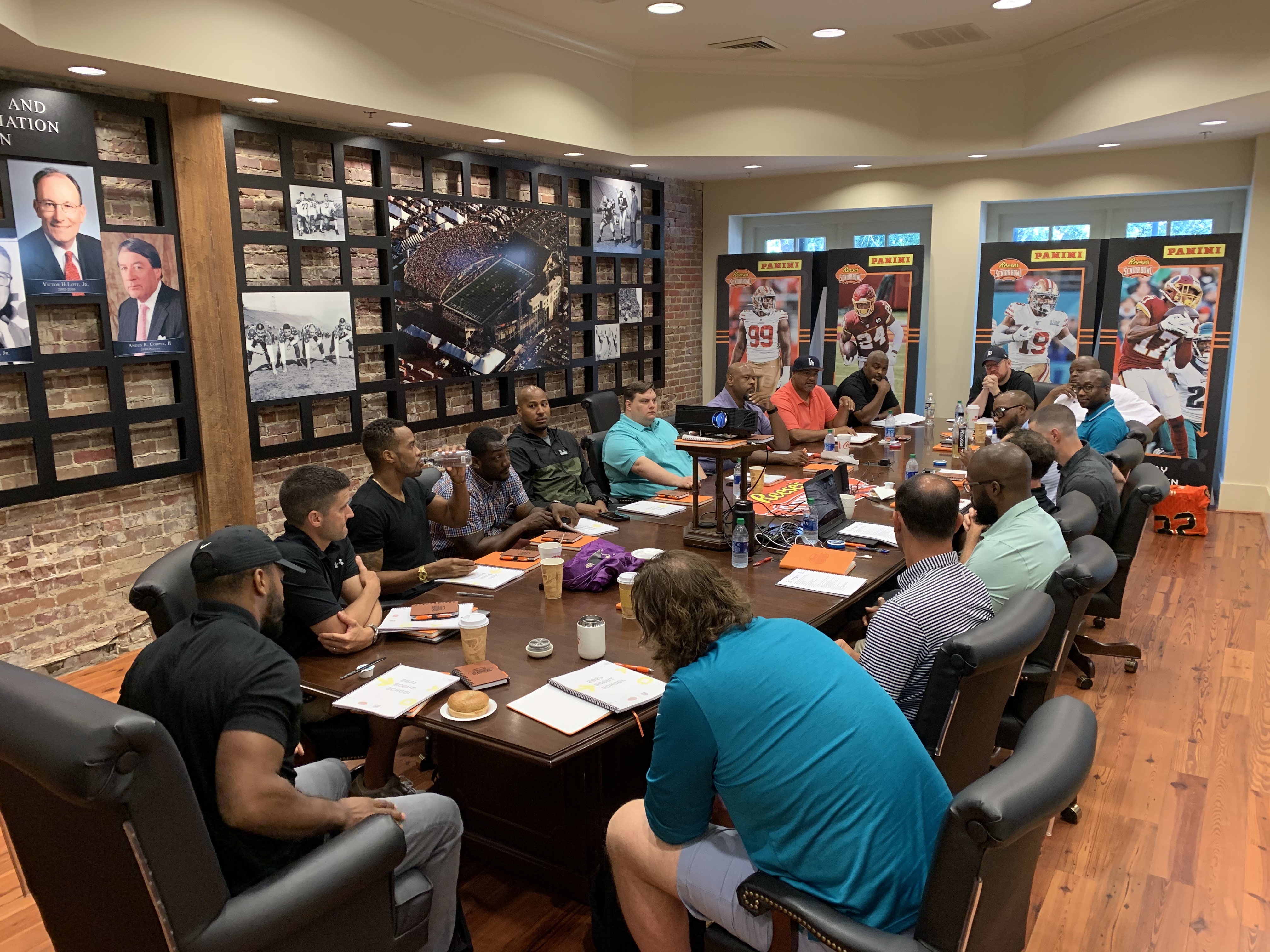 "Attending Scout School was a very critical part of my intro into scouting. Jim and Dan not only break down a scouting department but give you access to scouts on both sides of the department, giving you even more insight. The connections I made down at the Senior Bowl allowed me to grow my network within the league. The trip was well worth it!" -Ben Ijalana, NFL Veteran

“As a former player who had been through the draft process, played in the Senior Bowl in 1998, was drafted, played in NFL, won a Super Bowl and having done several internships with NFL teams post playing, I thought I had a pretty good idea of scouting and the evaluation process. But, the experience and invaluable knowledge gained going to RSB Scout School with the in depth amount of invaluable information, time, conversations, evaluations & projects Jim and staff provided at RSB Scout School took it to another level.” -Brad Jackson, NFL Veteran and Super Bowl Champion.

TOPICS TO BE COVERED:

How to make a college school scouting visit

In addition to the curriculum, participants will have the opportunity to ask their own unique questions and talk strategy on how they can build a career in scouting through their network and experiences. 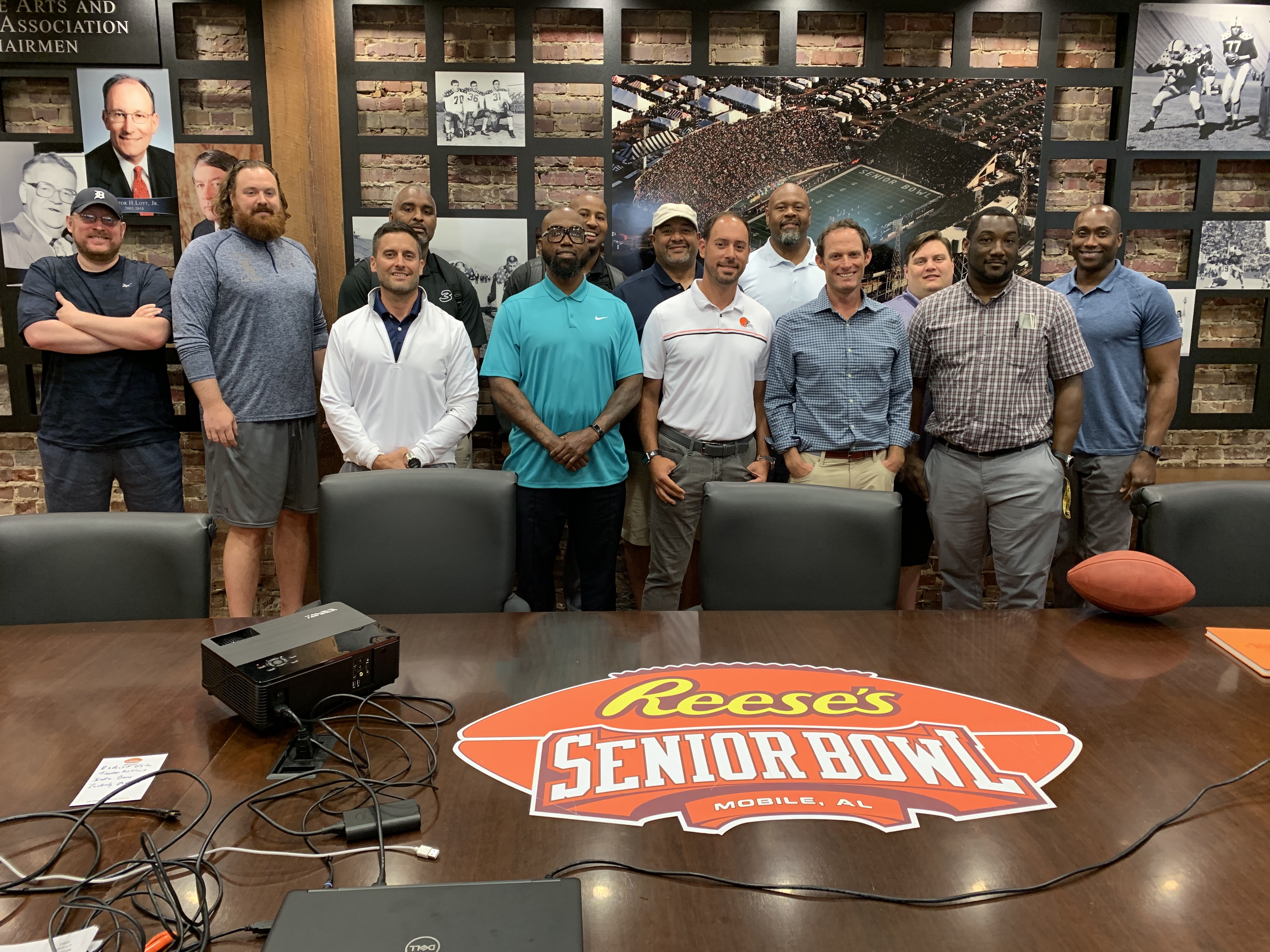 Scout school participants are free to book hotel rooms anywhere in the Mobile area but for logistical purposes we encourage attendees to stay at one of the numerous hotels downtown Mobile near Senior Bowl headquarters at 151 Dauphin Street.

The most convenient air travel option would be flying into Mobile Regional Airport (MOB); however, we encourage you to investigate both Pensacola International (PNS) and Gulfport-Biloxi International (GPT) for possible cheaper flights.  Both PNS and GPT are an hour drive from downtown Mobile.

Registration fees ($500) will cover the two-day course, as well as meals. Registration is limited and will be on a first come first serve basis. If you have any questions, please contact Senior Bowl staff via email: srbowl@seniorbowl.com

“In addition to being able to be part of the HBCU Combine and 2022 Senior Bowl and interact with the prospects on a daily basis as a group leader still while evaluating the players throughout the week and be able to speak with NFL teams scouts, personal directors, GMs and coaches who valued and wanted to hear our views and evaluations due to the trust they had in us because of the time spent at Scout School and the trust Jim and rest of RSB staff had to have us be part of the Senior Bowl team. I highly recommend Scout School for anyone who has a love of the game and interested in gaining invaluable experience and knowledge in real time and world atmosphere.” -Brad Jackson, NFL Veteran and Super Bowl Champion.